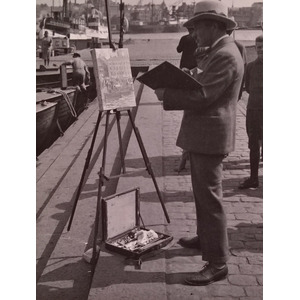 Eric Vasström studied in Helsinki, Saint Petersburg, Berlin and in Scandinavia. In 1917 he was employed as a drawing teacher in Helsinki, but he also produced works for several Finnish newspapers. During 1917-24 he even produced his own satiric magazine. Little by little Vasström developed into a brilliant Watercolor painter, landscapes from Helsinki was his main theme. Vasström was also a leading boy scout profile within the Swedish speaking minority, serving as the head of the association of Swedish speaking boy scouts in Finland during 1929-39.