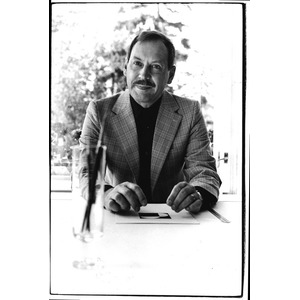 After his graduation, the graphic designer Rolf Christianson started work as a lithography student at Tilgmann’s publishing house. At the same time, he took a correspondence course in advertising and drawing at the NKI school (Nordiska korrespondensinstitutet). Later, in a newspaper interview in 1962, Christianson stated that the NKI-school had been a ‘first-rate course’ and had provided him with the best knowledge.

Christianson established himself as an independent graphic designer in 1951. During the same time he also designed the certificates which were to be used at the Olympic Games in Helsinki the following year. Furthermore, he had participated in the poster competition for the Olympics two years earlier and received a shared first place with fellow artists Heikki Ahtiala and Aimo Ronkanen. It was, however, Ilmari Sysimetsä’s poster for the 1940 games that came to be used.

Rolf Christianson established close relations with Switzerland, where he was fascinated by ‘the strict graphics’ that were characteristic of functionalism. Christianson successfully put into practice the theories which he had become acquainted with during his many trips to Zürich in several award-winning posters and other pieces of graphic art, such as corporate logos. One example of Christianson’s work is the film company Kinosto’s logo.

Christianson also distinguished himself as a stamp designer. In 1967, he was awarded first prize in the stamp competition ‘Finland –50 years of Independence’. He also won several of the UN stamp competitions; for example, the UN published his ‘Respect for Human Rights’stamp in 1982.