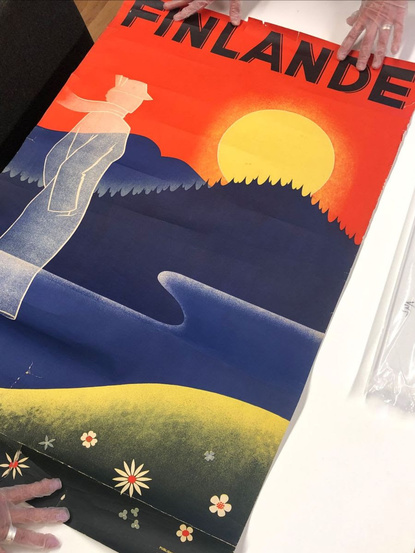 The French Lady is coming home

Sometimes the Poster Hunter leaves his beloved archive to go hunting. He is a hunter, after all.

This happened recently when an auction house in France called for a poster auction with hundreds and hundreds of original, international travel posters. Among all these goodies the poster hunter had seen a true gem. There, in the middle of the catalogue was a poster, actually the only one, from Finland. The Ghost Lady. Our beloved ghost lady. In French – with the text FINLANDE.

The Ghost Lady is Finland’s most stylish traveler. She is a mythical adventurer of the 1930s, a lady of grandeur and courage, who through hardships made her way to the wild country in the north. To the land where the sun never sets – to Finnish Lapland.

The artist is the Swede Ingrid Bade, who lived in Finland for a while and during that time created some iconic Finnish travel posters. Bade had long been forgotten in Finland, but fifteen years ago the poster hunter started his sacred mission to give Bade the honor she deserves.

On the poster the Ghost Lady (or Bade) stands by the plains in Lapland and contemplates. She becomes one with nature. She is the epitome of what travel was and should be.

So when people from, what it seemed, the whole world started bidding at the auction the Poster Hunter immediately noticed that this was different. There were many out there who wanted to decorate their walls with her calm and wisdom.

The Poster Hunter began softly and thoughtfully, but as the bidding pace rolled up and the amount increased, he became increasingly convinced that much was at stake. It was about saving a piece of Finnish poster art and cultural heritage. It was about reuniting her with the motherland so that she could spend time with her peers and generational friends in Come to Finland’s unique poster collection.

There was electricity in the air when the auctioneer, a stylish middle-aged French lady shouted out the bids to the right and left.

But the Poster Hunter didn’t give up. Not when this much was at stake. In the end, it is he against an unknown stingy bidder, who is bidding over the phone. The hunter raises, the opponent raises, but with the hunter knowing what he wants the opponent – finally – folds and the gavel hits the table. The French Ghost Lady is coming home!

The poster hunter rushes to his other Finnish poster darlings in the collection to tell them  about the lost daughter who will soon return. And when he listens really carefully, he hears how they whisper: Bienvenue!

The English lady is eagerly waiting for her French friend in our webshop.

This summer's cultural hit is in Stockholm!