Home / Tales from the Post Hunter / The poster isn’t lying 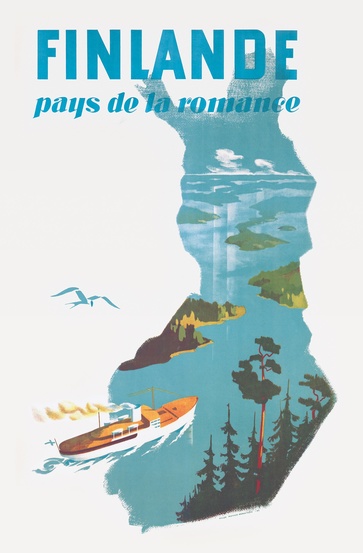 August – the International Holiday Month! Tourists from all over the world are flowing to Finland from near and far.

Or as we can read in a brochure from the 1930s: “GLORIOUS, thrilling and healthy holidays can be spent in Finland”

… Well, of course not this year. But so you can understand why Finland normally is such a popular travel destination, let the Poster Hunter shed some light on the matter.

The Finnish Tourist Association was founded in 1887 for patriotic purposes. It raised Finns to see that you really don’t have to travel to the mountains of Norway or to enchanting metropolises like London or Paris. No, they strongly emphasized that the adventure is at home.

Eventually, it was realized that the association had another big task: to attract people from Sweden, Germany, United Kingdom, France and America to come to Finland.

How, then, should they prosper in this? By printing brochures (starting from the late 19th century), making tourist films (the first as early as 1911) … but above all by creating posters.

The association harnessed the task to the country’s best artists and illustrators – sometimes even foreign ones! – to spread the good news. These pioneers immediately realized that the target group must be international.

They succeeded. Who could have resisted the temptation when a woman in a national costume whispers that you, yes you, should come to Finland!

The rest is history. In the 1930s and 1950s, lofty tourists from all around the world suddenly stood on the windy pier of Helsinki with their suitcases. And they probably hoped that the promises of posters and brochures would come true in real life. After all they had learned:

“Finland is a country of western habits, even western luxuries, and hospitable to strangers”

In some miraculous way, the hosts succeeded in this. The posters had not lied, at least not completely. And that’s why, dear poster friends, that’s why Finland is so popular today.

The Champagne Lady has been revealed!

The French Lady is coming home

All you need is a (stylish) travel buddy