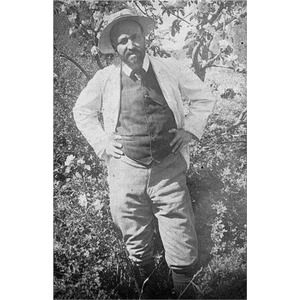 The celebrated painter and graphic designer Hugo Simberg began his art studies at the Viipuri Friends of Art Drawing School in 1891. Later, from 1893 to 1895, he studied at the Finnish Art Society’s Drawing School in Helsinki. However, he was not satisfied with his studies there. He wrote a letter to the great artist, Axel Gallén (later Akseli Gallen-Kallela), and asked him if he could be his private student. Gallén accepted and Simberg studied with his new teacher in Ruovesi in the Province of Southern Karelia, from 1895 to 1897.

Hugo Simberg took on a limited number of commissons. He produced graphic work for, among others, the Kymmene Group, the Aura Sugar Company, as well as the seaside resorts of Mariehamn and Möckelö in the Åland Islands. He also designed book jackets for the author Volter Kilpi and the poet Johannes Pilger.