Home / Tales from the Poster Hunter / The secret terrace bar 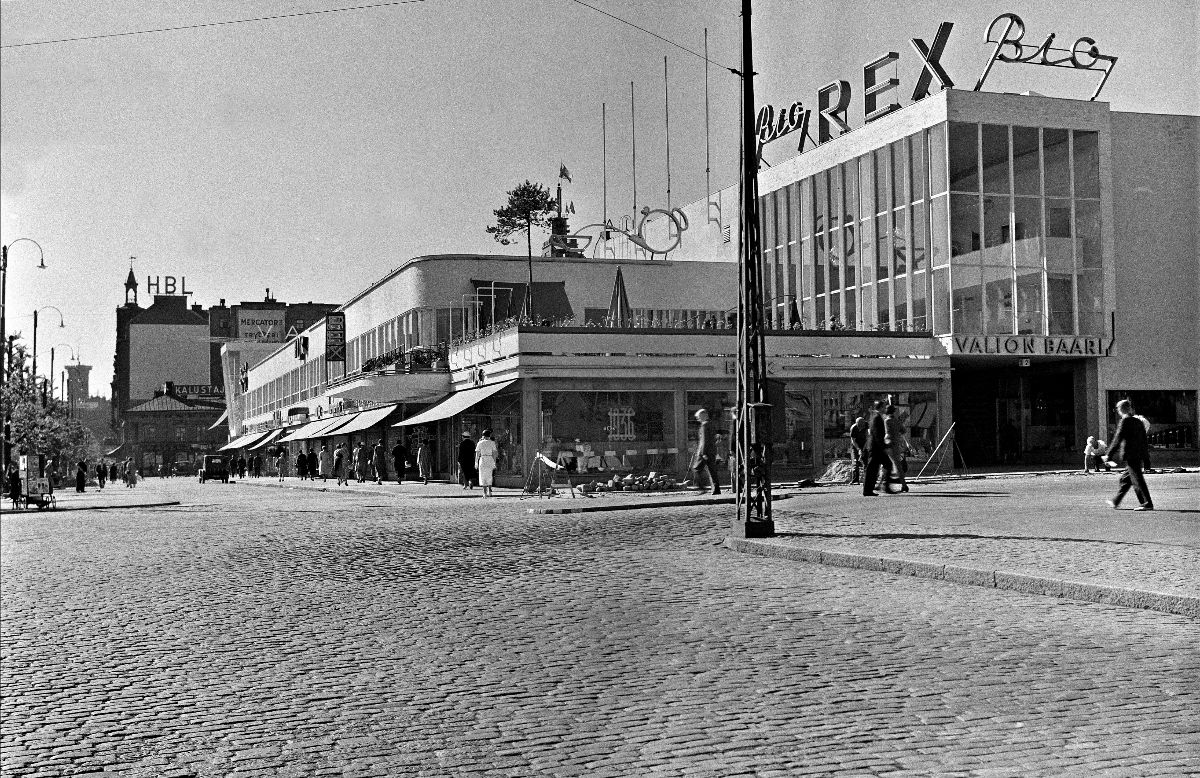 In our previous newsletter, the Poster Hunter left you with a cliffhanger:
Where exactly is our iconic Champagne Lady from 1939, drawn by Jorma Suhonen, sitting?

For those of you who are familiar with the center of Helsinki, you realize that there is something not quite right in this poster. There is not a single restaurant on Mannerheimintie – at that time know as Heikinkatu – where the Champagne Lady could sit and enjoy her fancy drink with the view of the Parliament in the background.

Countless times, for example at our exhibition at the National Museum of Finland, people have asked us with an intense look: ”Excuse me, but where is she sitting?”

We have been absolutely completely puzzled. There are no restaurants there!… Or maybe there was at that time?

The Poster Hunter is a very curious person. He started rummaging through the photo archive of the Helsinki City Museum. Ah, look at that, Postitalo (the Post Office building) was completed in 1938. What if the Champagne Lady sat in an open-air restaurant at the north end of the house, in the enchantingly new building? The view might match! 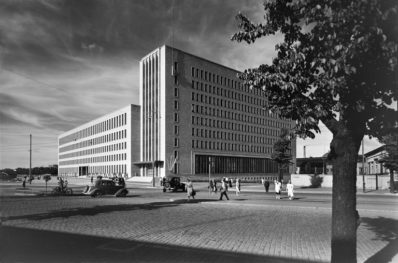 But after diligently browsing through photos from the late 1930s, the Hunter soon realized that there had never been a restaurant on the eastern side of Mannerheimintie / Heikinkatu. But what about the street-level restaurant that was located where the deparment store Sokos is today?

… Well no. Old photos reveal it: There was no terrace. And besides, the construction of the Sokos building began already in the late 1930s. 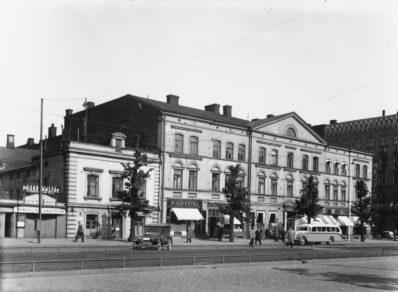 This picture is from 1937. And yes, they had a resturant on the street-level, but alas, no terrace.

The Poster Hunter was going crazy. Unsolved mysteries is the worst thing he knows.
But all of a sudden, fate stepped in and a poster fan suddenly reached out: “Have you seen the film Aho & Soldan kuvaavat Helsinkiä 1937 (Aho & Soldan filming Helsinki 1937)? Have a look at 5.31!”

The Poster Hunter knows the tips of the general public often doesn’t lead anywhere. So he arrogantly tapped his fingers and watched the film thoroughly towards the end. And then he got his champagne in the wrong pipe… 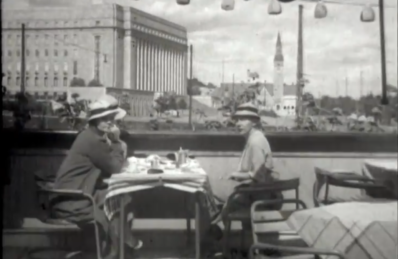 Tadaa! Here the Champagne Lady could enjoy both a good drink and a beautiful view.

There they are! The crème de la crème of Helsinki enjoying some drinks at an open-air restaurant – with the Parliament House in the background!

And if you look carefully, you realize that they are actually sitting at the terrace of the functionalist building Lasipalatsi (the Glass Palace), that was completed in 1936. Oh holy Moses! That’s the same terrace where Poster Hunter himself has enjoyed a drink (or two) in the happy late 1980s.

It’s awkward, but the Poster Hunter admits: His own home town has blinded him completely.

Admittedly, the artist has exercised his creative freedom and played with perspective. But there is no doubt that this is where the Champagne Lady sits. At the terrace of Lasipalatsi, of course.