Home / Tales from the Poster Hunter / This summer’s cultural hit is in Stockholm! 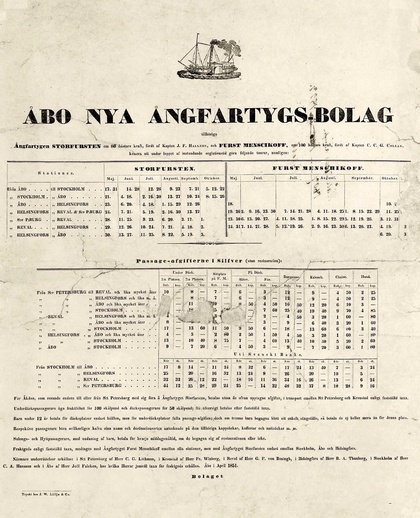 This summer’s cultural hit is in Stockholm!

By ferry to Stockholm! It is difficult to come up with something more classic in Finnish travel history. And in the summer of 2022, there is an extra important reason to jump on board.

I will reveal that soon, but first a little background.

As early as the middle of the 19th century, the first regular passenger ferries began to run between Helsinki / Turku and Stockholm. Poster art was involved right from the start. On factual text posters, it was proudly announced that Captain Halleen or Collan would steer the ship. The posters also offered timetables plus price information in silver coins.

Fast forward a hundred years and see how the Finnish poster master Erik Bruun attracts, to the exact same journey, with salmon, cognac and cigars! It was the 1950s – the good life had arrived! 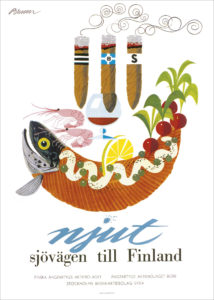 Yes, the Turku / Helsinki-Stockholm route has always been pure charm. At the beginning of the 20th century, you could board the Finland Line in Helsinki with the final destination Hull in England. Or you could take the ferry to Lübeck in Germany. Or to Copenhagen in Denmark. But note! These fantastic routes always went via Stockholm.

In other words, Sweden’s capital has for almost two hundred years been the first (possible) stop for Finns who want to travel west.

In addition, as I have already hinted at, there’s in the summer of 2022 a completely new super-important reason for heading west. Since this recommendation comes from The Poster Hunter, it’s obviously about… posters. You never doubted that, now did you?

After many years of frantic poster collecting around the world and deep dives into tourist archives throughout the Nordic region, we have completed our new exhibition: Come to Norden. The exhibition is on display at the parade ground at the Nordiska museet in Stockholm. It could not be more central or Stockholm-glamorous: The museum is located on the lovely island Djurgården, in that ”castle” on the right hand side when you cross the bridge.

So, what can you expect from the exhibition? 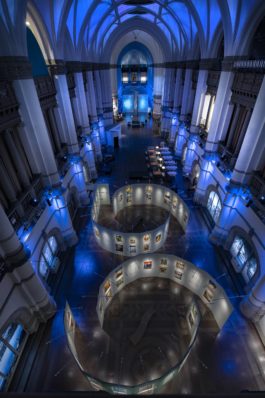 We show how the Nordic countries separately and sometimes even together did everything to attract tourists both from neighboring countries and from the other side of the Atlantic. Denmark had the beaches and a country full of carefree connoisseurs. Norway had the fjords while every single citizen could ski. Sweden was so varied in nature and sights that each region printed its own handsome poster.

Sometimes the Nordic countries even succeeded in cooperating, for example when making posters for Nordic interrail long before interrail existed. But sometimes they also quarreled, especially Norway and Sweden. Sweden was jealous of Norway (due to the fjords) while Norway was angry with Sweden because they also used the slogan Land of the Midnight Sun.

You have to visit the exhibition to see for yourself!

To celebrate the route to Stockholm, we now have -25% on selected maritime posters in our range (until July 12, 2022).

The poster exhibition Come to Norden at the Nordic Museum at Djurgården in Stockholm, open every day June – August from 10.00–17.00 hrs.