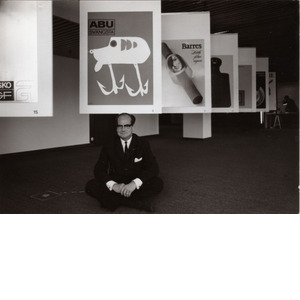 Heikki Ahtiala, a draughtsman and commercial graphic designer, studied at the Central School of Arts and Crafts from 1934 to 1936. It was during his time as a student that Ahtiala began his advertising career at the advertising agency SEK, where he remained until 1949, when he took up a new post with Ilmo Oy.

In 1951 Heikki Ahtiala moved to the advertising agency Oy Mainos Taucher Reklam Ab where he worked until he retired. At Taucher Ahtiala was the art director and spent a lot of his time planning projects and tutoring younger graphic designers.

Besides working at Taucher, Ahtiala was also a teacher of typography and layout at the school of the Finnish graphic designers’ association, Mainosgraafikkojen koulu (MG), and the Vocational School of Arts and Crafts.